Its been a long time between posts. A lot has been happening the last six or so weeks.

I've been thinking about just shutting down my blog because i just don't have the interest in documenting the details anymore, but then i feel bad for Sofie not having any records of her babyhood so i expect i'll keep it and just update it infrequently for the time being.

So a basic recap minus too many details of the last 6 weeks includes: a week away at my dads to celebrate his 80th birthday, we came home and Andrew had 2 weeks study leave before finishing up his exams for the semester (more on that in a minute), we moved house and that involved all the horrible cleaning and unpacking stresses but we had loads of help from various members of Andrews extended family which i will be forever grateful for and we got it done and everything is looking like a home now (i even have my very own sewing room which i will post more about soon) We also began Harry's 3 weeks of school holidays (we are on the final week now) and its been a really wonderful break. I love having a break from the routines of school and having to be out the door by a certain time each day and  we have had lots of play dates and time has just flown.

Oh and most excitingly we  have a new addition to our family. We have called him Dusty and he is our robot vacuum. He is amazing. Best thing i have ever bought!!!! Seriously!!! And i know we are quite a gadget family but this is one of the greatest inventions.

Anyways while i'm here i'll do a quick Sofie update:

She is an absolute gem of a baby. She just oozes happiness and we all adore her (as you would expect ;))
She is 8 months now and sitting up. She weighs 8kg at her last weigh in. No teeth and no movement yet. Which i think is a positive, cos im not ready to be chasing after my toddler, She is going great guns with her solids prefers fruits and yoghurts and discovered today that she is an absolute strawberry monster.
I'm still in my mothering bliss with her.  Its a really nice feeling, after feeling so sad and anxious for so long to just feel this happiness.

Now onto a quick proud post about Andrew. He got his exam results the other day and managed to get a distinction and high distinction for the course he is doing. Im so proud with how he managed such great marks along with working full time and being an awesome dad/husband at the same time.

Im just glad he is happy in his new job but it still allows him the time with the family.

Anyways gotta run, offspring is starting, will try to not be so infrequent with the posting but no promises :)
Posted by Sars at 3:51 AM 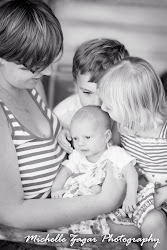 Sars
Townsville, QLD, Australia
Hey there, Welcome to my home in this wide world of the web. I've been blogging for over 7 years or so now and decided i'd like a change and here you have found it. I'm a 30 year old mum so my life and ultimately my blog, mostly revolves around the three little ones... With the odd bit of sewing and craftiness by moi, cooking disasters and creations , holidays and whinge fests and party planning on a limited budget thrown in. Basically just a little journal to look back on... Sarah.